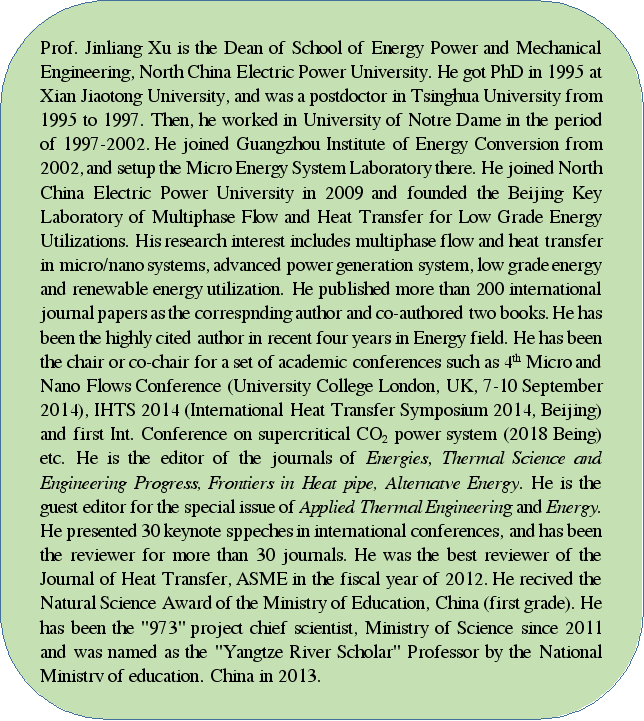 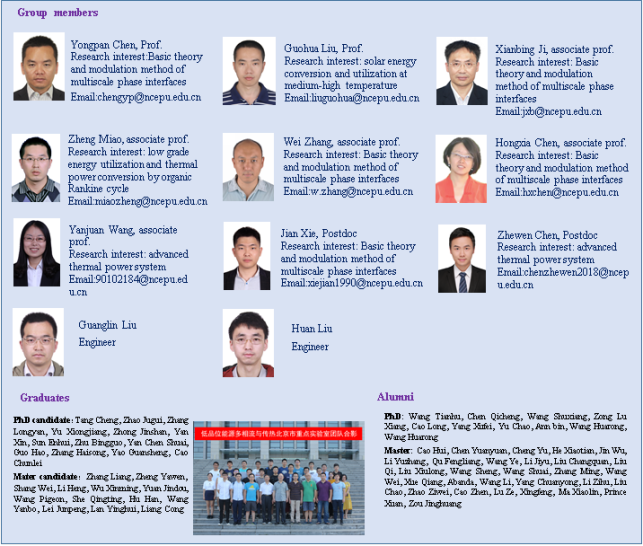 The Beijing Key Laboratory of Multiphase Flow and Heat Transfer for Low Grade Energy Utilization was founded in 2011, April. Targeted for basic understanding and technology development for efficient utilization of low grade energy utilization, the laboratory has following research directions:

The laboratory has eleven faculties and staffs, including three professors, four associate professors, two post-doctors, and two technicians. Faculties are active to perform academic exchangers. More than 30 students are in the laboratory to get master degree or Phd degree.

Three-atom-model: A three-atom-model was proposed to judge the type of boundary conditions (slip, non-slip and locking) at specific molecular (or atom) interactions between solid and liquid (see Li YX, et al., Nanoscale and Microscale Thermophysical Engineering 10 (2006): 109–141).

Switchable heat transfer in nanochannels: In nano-Janus system, by changing surface wettabilities of the two solid walls, driving forces, and wall temperatures, the fluid temperature gradient in channel height direction can be changed, and the heat flow sign can be switched between positive (heat transfer from hot wall to cold wall) and negative (heat transfer from cold wall to hot wall). The finding is useful for the development of temperature sensitive nano-devices (see Zhang LY, et al, Int J Heat Mass Transfer, 127 (2018) 761–771).

Modulated porous wick evaporator for loop heat pipes: Conventional loop heat pipes use solid wall microchannels as the primary wick. We use the multiscale porous wick to replace microchannel structure. The loop heat pipe achieved an evaporator wall temperature of 63 oC at a heat load of 200W for anti-gravity operation, under which the heat flux attained 40 W/cm2, which is 1.7-6.7 times of those reported in references (see Xu JL, et al., Int J Heat and Mass Transfer 72 (2014) 163–176).

Non-equilibrium phenomenon in ORCs: The thermodynamics theory specifies saturation vapor at expander inlet and saturation liquid at pump inlet to reach maximum thermal efficiency. Our experiments show that a vapor superheating such as >10 K, and a liquid subcooling at pump inlet such as ~20 K, are needed to maximize the mechanical work, under which droplet impacting during expansion and bubble cavitation during pumping processes can be avoided. Thermal non-equilibrium is necessary in ORC system (see Yang YF, et al., Energy 90 (2015) 864-878).

--Fundamental research of flow and heat transfer in micro/nanochannels

Micro energy system refers to system in which the energy conversion and transport occur in a small volume to generate functions such as power supply. It has wide applications in electronics, aerospace and biology. Here, we focus on micro energy system with phase change as the key process. The coupling of interfacial effect at the wall surface and channel size effect is paid more attention. Major achievements are as follows:

2.1．Fundamental research of flow and heat transfer in nanochannels

  A three-atom model and a new criterion number were proposed to identify the relationship between boundary condition and solid-liquid interfacial parameters.

  A hybrid atom-continuum model adjoining molecular dynamics and continuum mechanics is developed. The absoluteness and relativity of boundary conditions are found for the first time. The slip length is observed to be only dependent on interfacial parameters of solid/liquid atoms, not dependent on channel size (see Fig. 1a for absoluteness). Alternatively, slip velocity on solid wall is decreased to approach zero when channel sizes are continuously increased (see Fig.1b for relativity). 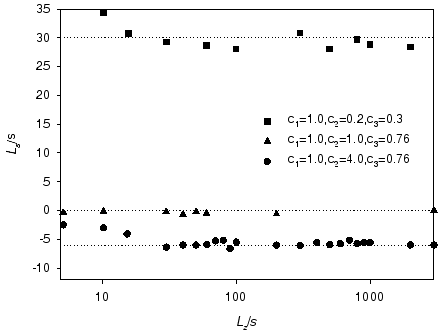 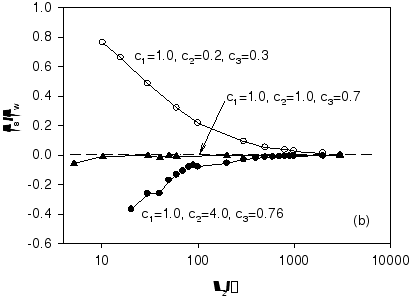 2.2．Mechanisms and methods to enhance heat transfer in microchannels

  The single-phase heat transfer in microchannels can be enhanced by using the thermal boundary layer re-developing concept (see Fig. 3). 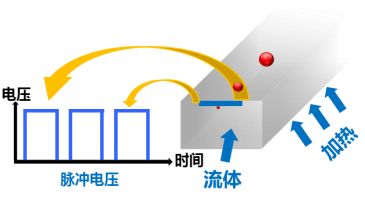 Fig. 5a Generation and utilization of seed bubble 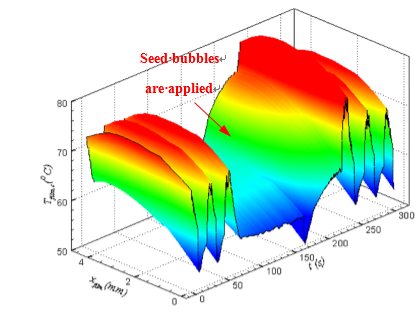 2.3．Methods to indentify and eliminate flow instabilities in microchannel 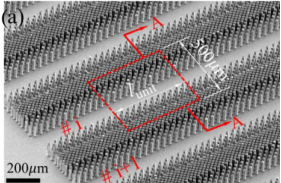 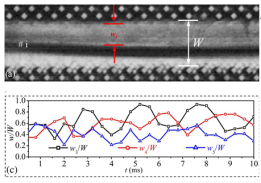   A mode selection criterion is developed for onset of sliding and rolling, which is only dependent on equilibrium contact angle e .

  Collapse and breakage of nanograsses worsen heat transfer for long-term operation, and there is a decay limit of heat transfer coefficient after nanostructure failure.

  Three-drop detachment modes including jumping, sliding and rolling are included in the model. The predictions match experiment for both SSML and NGS. 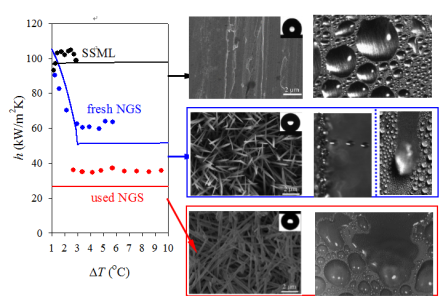   The other is fabricated on copper substrate with arrayed hydrophilic microdots among superhydrophobic nanostructures, utilizing selective corrosion with the mask of mesh screen.

  The space between neighboring drops can be tuned in a reasonable range by mesh pore size, ensuring that drop coalescence-induced-jumping always occur.

  The heterogeneous surface can be used as the next generation of functional surface to behave controllable dropwise condensation heat transfer and resist nanostructure failure for long-term operation.

  Using extended condenser to increase condensation area by a set of channels prepared within fins.

  Bionic capillary wicks were sintered on the inner evaporator surface. Integrated design of evaporator and condenser (heat sink) ensured tight contact between the heat pipe and the heat sink.

  Many channels within fins coupled with wicks lead to a lots of miniature heat pipes operating simultaneously.

  Increase the heat dissipation performance by 20% (Products for LED are shown in Fig. 1).

  Reduce the center temperature by 20℃; decrease the weight of radiator by 50%.

  Material cost can be saved by 50%. The detail comparisons with conventional LED radiator list as follows: 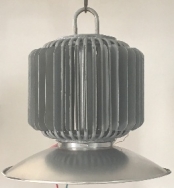 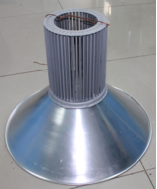 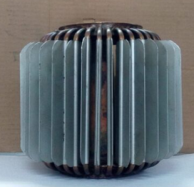   Liquid supply towards the heating area is sufficient due to the extended condenser within solid fins, thus ultra-high heat flux can be sustained without reaching dry-out state at the heating area.

  The fin pieces act not only as heat sinks but also condensers. The condensation heat transfer within solid fins ensures uniform temperature distribution along the fin height direction, increasing the fin efficiency.

  It can be operated under the anti-gravity condition with compact volume and light weight. There is no contact thermal resistance between the evaporator chamber and the fin heat sink due to the integrated design.

  Three layers wicks were constructed within a loop heat pipe, the primary-layer wick is modulated porous wick instead of conventional microchannels in evaporator. The porous wick separates flow paths of vapor and liquid. Liquid is supplied within the porous stacks by the capillary force and evaporation happens at the solid-liquid-vapor interface. These structures simultaneously offer large valley size for vapor venting and small pore size for liquid suction.

  Evaporator temperature can be reduced to 20-50℃ of the conventional loop heat pipe, and the maximum heat flux can reach 40W/cm2.

  The maximum anti-gravity height can reach 500 mm at the heating power of 300 W. 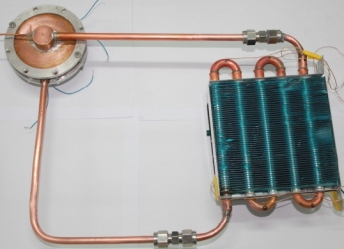   It can operate under the anti-gravity condition

  Heat dissipation can be conducted at the high power and long transmission distance.

Heat dissipation of optoelectronic equipment in the fields of aeronautics and astronautics, energy power and military, etc.

  Evaporation heat transfer coefficient can be increased by 2.4 times.

  Condensation heat transfer coefficient can be increased by 4 times.

  Greatly improve the stability, reliability and service life of the equipments.

Heat dissipation of compact electronic equipments, such as notebook computer, microprocessor and so on. 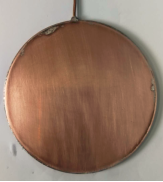 Fig. 3 Ultrathin heat pipe (the thickness can be less than 1.3 mm)

We have mastered a series of key technologies, and have won 8 invention patents and technology awards for many times (see Fig. 4). 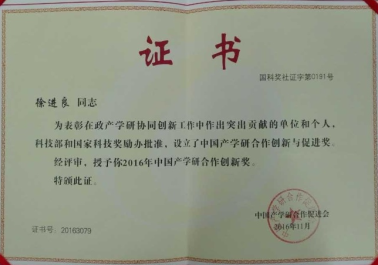 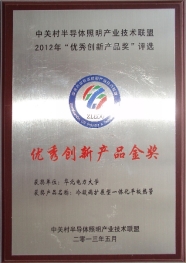 Organic Rankine Cycle (ORC) is a key technology to convert low grade energy such as flue gas energy and renewable energy such as solar energy into mechanical power. We focused on the coupling mechanism between heat carrier fluid and organic fluid, organic fluid selection, organic fluid condenser, and prototype of ORC system development. Major achievements are as follows:

The selection of working fluids for ORC is scattered in the literature, and there is no general guideline for fluid selection. In this project, the non-dimensional temperature difference is proposed to characterize how better the heat source fluid matches the ORC system. In terms of this, it is found that the thermal efficiency reaches maximum or is better when the critical temperature of a fluid approaches or is larger than the heat source temperature. The critical temperature is a unique criterion for fluid selection, providing a general guideline for ORC fluid section. This conclusion is correct for sub-critical ORC and super-critical ORC (see Figs.1-2). 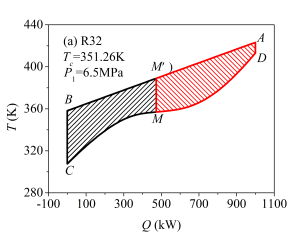 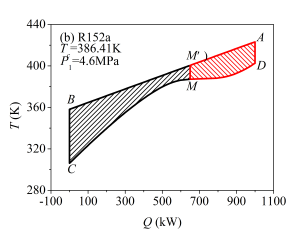 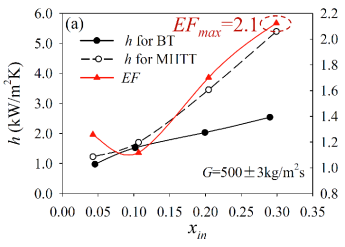 The whole ORC system was demonstrated including fluid selection criterion, phase separation condenser, non-equilibrium criterion to avoid vapor cavitation and control system. At the heat source temperature of ~100oC, the net thermal efficiency can reach 6.35%, which is the highest by comparing with the existing literature. Experiments show that the system can self-adapt the variations of heat source parameters such as heat carrier fluid inlet and outlet temperatures and flow rate, and cooling source parameters. The system can operate in off-grid mode, but the generated electricity can also be transmitted to power grid(see Figs.5-7). 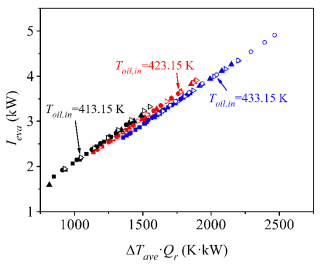 Fig.6 The ORC system developed in our laboratory

Background: Energy is a base resource for sustainable development of human society. Among various energy resources, solar energy attracts special attention since it is an abundant and inexhaustible energy source. Efficient strategies for solar energy conversion include photovoltaic, solar thermal conversion and artificial photosynthesis. The photoelectric conversion converts solar energy into electricity by the photovoltaic effect. While the production of solar panel requires large amount of energy with high cost that induces serious pollution to the environment. Alternatively, radiant energy can be transformed into thermal energy by the photothermal effect of materials. This strategy has gained most interest due to its extremely high efficiency. Artificial photosynthesis is a photochemical process that replicates the natural photosynthesis, a process that converts sunlight, water and carbon dioxide into hydrocarbons. In this background, we propose optofluidic concept for the study of solar thermal and/or chemical conversion with focus on multi-phase flow opportunities in sunlight-based steam or fuel production processes. The research offer new insights into the related physical processes, and could stand for a basis to design novel systems for engineering application.

1. Z-scheme：The possibilities of applying two-photon concept to the field of solar fuels are highlighted. A wide range of strategies including the indirect combination of two semiconductors by a redox couple, direct coupling of two semiconductors, multicomponent structures with a conductive mediator, related photoelectrodes, as well as two-photon cells are discussed for light energy harvesting and charge transport. This gives a new perspective on artificial photosynthesis, outlining an encouraging roadmap towards solar fuels. 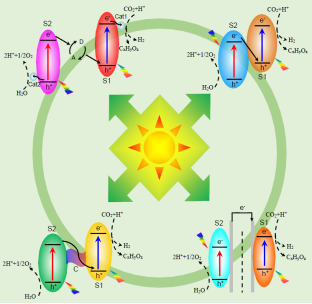 2. Light-harvesting antenna: The ordered nanotube arrays were prepared and their wettability was studied. The nanotube film has a strong hydrophilic property. The hydrophilicity was further improved after annealing. The hydrophilicity was enhanced with the increase of the diameter of nanotube and the excessive oxidation on surface. Moreover, plasmonic gold nanoparticles and dielectric silicon oxide are sequentially deposited on the surface of ZnO nanorods to tune their photoelectric performance. The results show that the optical design of plasmonic coupling with dielectric spacer dramatically leads to an outstanding photocurrent enhancement, which is ~ 4-28 times higher than that of the other counterparts. 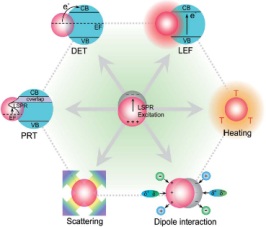 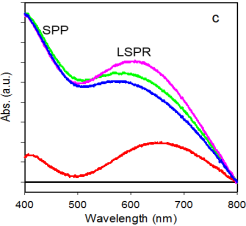 3. Solar evaporation and artificial leaf：Solar water evaporation are explored through a hanging droplet containing plasmonic nanoparticles. These nanoparticles induce multiple scattering events, increasing photon absorption and concentrating the light within the mesoscale domain, leading to an intense collective heating that trigger the evaporation. The droplets with different initial-particle-concentrations lead to evaporation at various rates and an optimal initial-particle-concentration can be expected. In addition, we propose the concepts of micro/nano materials and optofluidic systems for solar energy harvesting and CO2 utilization. The research consists of solar chemistry research of porous composite catalysts as well as innovation of microfluidic techniques in the field of photochemistry. Micro-fluid networks are introduced to modulate two-phase flow patterns over the catalyst surface to improve the performance of artificial photosynthesis. 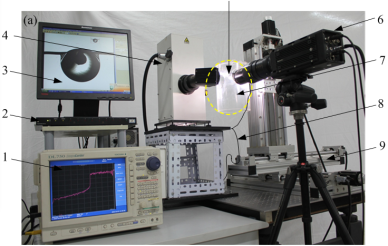 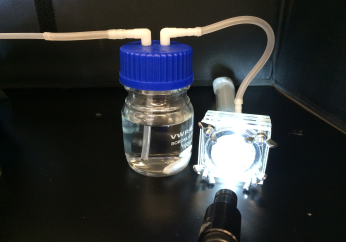 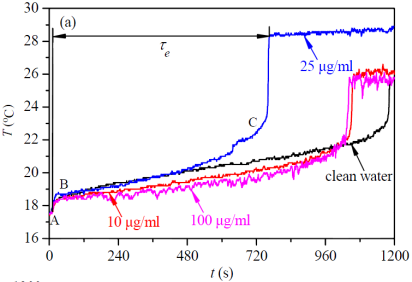 4. High-flux solar simulator：The simulator consists of an optical system, a power source, an air cooling system, a control system, and a calibration system. Seven xenon short-arc lamps are employed with each consuming 10 kW. The seven lamps have a common focal plane that can be tuned in the range of 60-120 mm with the lamp module traveling the distance in a range of 0-300 mm. The irradiant flux distribution can be tailored by varying the power capacities and/or moving the focal plane locations. The peak flux and temperature exceed 4 MW/m2 and 2300 K, respectively, for the full power capacity. 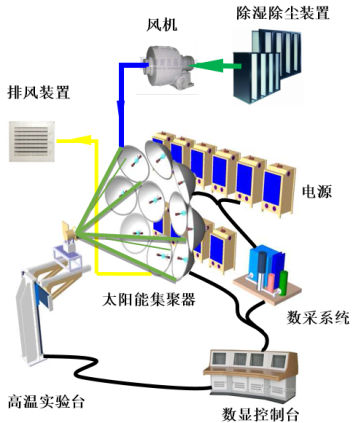 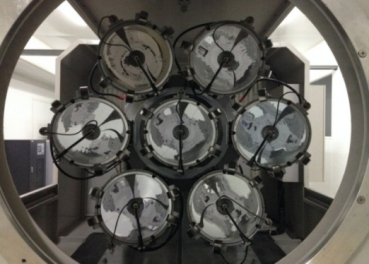 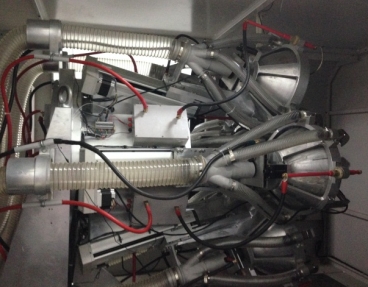